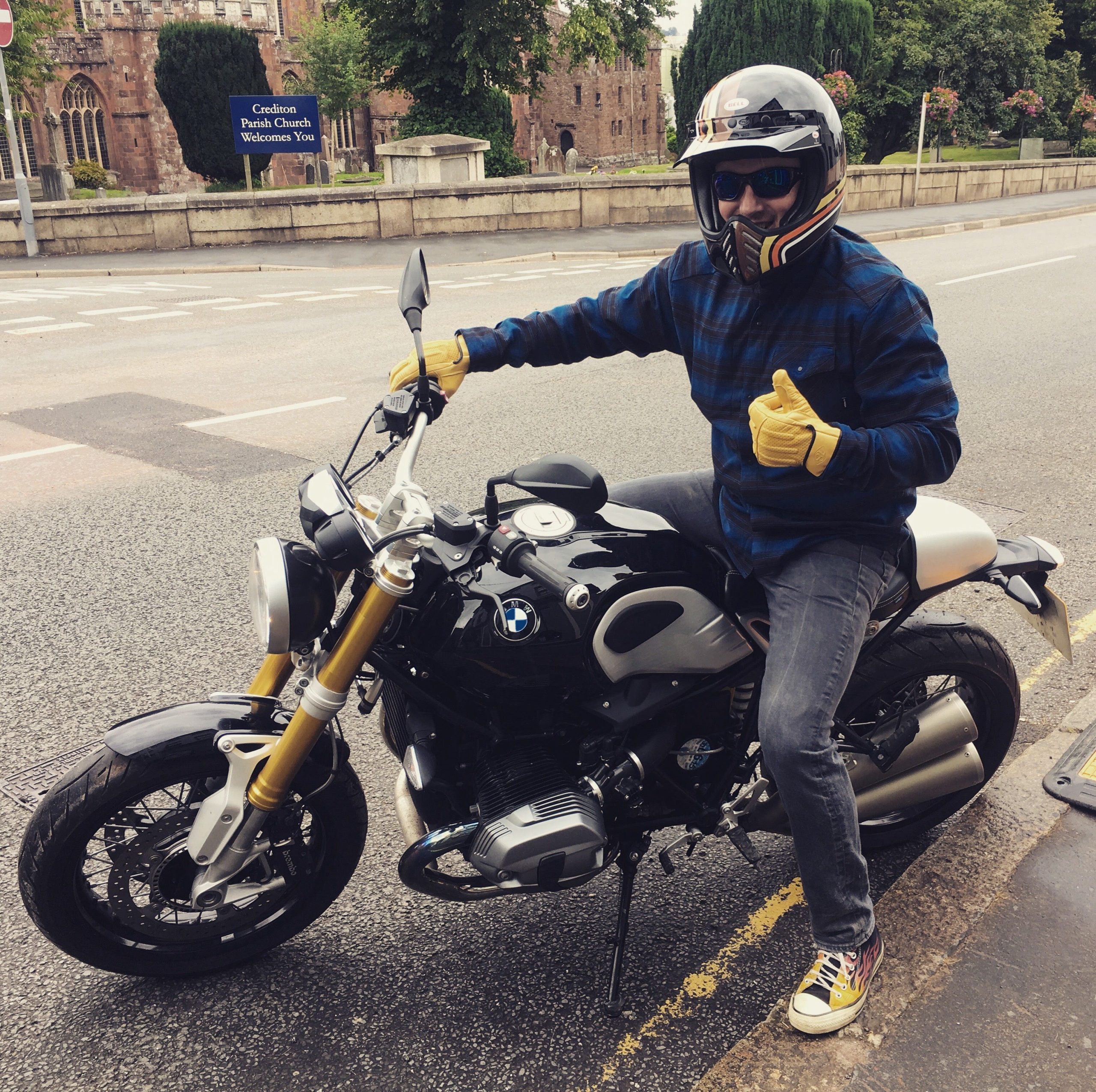 Accelerating climate change means that spring and autumn can provide some of the best road – riding conditions in the SouthWest – great temperatures, fewer grockles towing their caravans and a lot less flies to get in your teeth!

On a whim during a stretch of great riding weather I agreed to meet up with my mate Phil for a midweek day of fab road riding. He had just bought a truly enormous brand new Triumph Rocket III Roadster and I hired Union Road’s fantastic Thruxton R, a silver arrow of retro – loveliness for the day.

We met in Kilve, Somerset after respective morning blasts up from Devon and down from Wiltshire. A quick chat and we shot off westward on the swooping curves of A39, skirting the Quantock hills and avoiding the distractions of Hinckley Point visitors centre and the no-doubt intriguing Bakelite Museum in Williton. We did take a slight diversion towards the coast, through scenic Watchet and Blue Anchor, before re-joining the main road just as Dunster Castle loomed  ahead of us, lit by the sun and rising from the golden forest – fringed meadows that unfolded between us.

Turning left and past the castle and it’s closely – skirted town, still huddled beneath its impressive walls, we hit the A396 at high speed through Exmoor National Park.

These are some of the most thickly forested and game – packed roads in the country and we saw lots of Exmoor ponies, glimpses of deer and there were lots of fat, crazy – legged pheasants to dodge as the road followed the path of the river Exe.

On and on, past the iconic Black Cat Garage and the Exeter Inn, we slowed through Tiverton. Still a major industrialized town, originally from the water and steam power provided by the thundering Exe, it is a pretty town where JD Salinger conceived “The Catcher in the Rye” whilst stationed here as a GI in the Second World War.

But there was no good coffee available, so we opted the adrenaline offered by continuing along the A396 to Bickleigh (with its infamous dog-legged double bridges) and right at The Fisherman’s Cot. Another perpendicular pontoon and then sharply uphill on the stunning A3072 to Crediton in the heart of Devon.

To be honest, is very hard to believe that either of these roads are considered major trunk roads, being so deliciously narrow and twisting. If like us, you are lucky enough to avoid the legions of lorries, farm vehicles and caravans which incredulously ply such an unsuitable route, the roller – coasting tarmac has a LOT to offer on two wheels.

With the skies temporarily darkening, we stopped at the well – placed Union Road Moto Velo for a warm welcome and some really great coffee. After a great chinwag on all things bike and a bit of retail therapy for Phil, indulging his leather fetish with some groovy new gloves, we were off again.

The twisty route to connect with the sweeping A30 at Tedburn St Mary took us into Dartmoor, our second National Park in just over an hour. Onwards and upwards past Chagford, to the chilly heights of Lettaford and beyond. The big vistas of the high moor opened up and the constant visual tension was heightened as the wonderful views, open roads and occasional black – faced sheep and more moor ponies all competed for attention.

We smelt the warm fire and saw the isolated position of The Warren House Inn, still miles away in the distance, with plenty of time to slow, gesticulate wildly to each other and agree to stop. Noticeably cooler at this altitude, we had a delicious, warming bowl of pumpkin soup.

Cracking on we past the sinister granite edifice of the high security Princeton Prison, before crossing several cattle grids on the sharp descent into Yelverton. A quick fill – up and we were on our way to the A38 and back to URMV for me and on to Wiltshire for Phil after and truly memorable days riding.