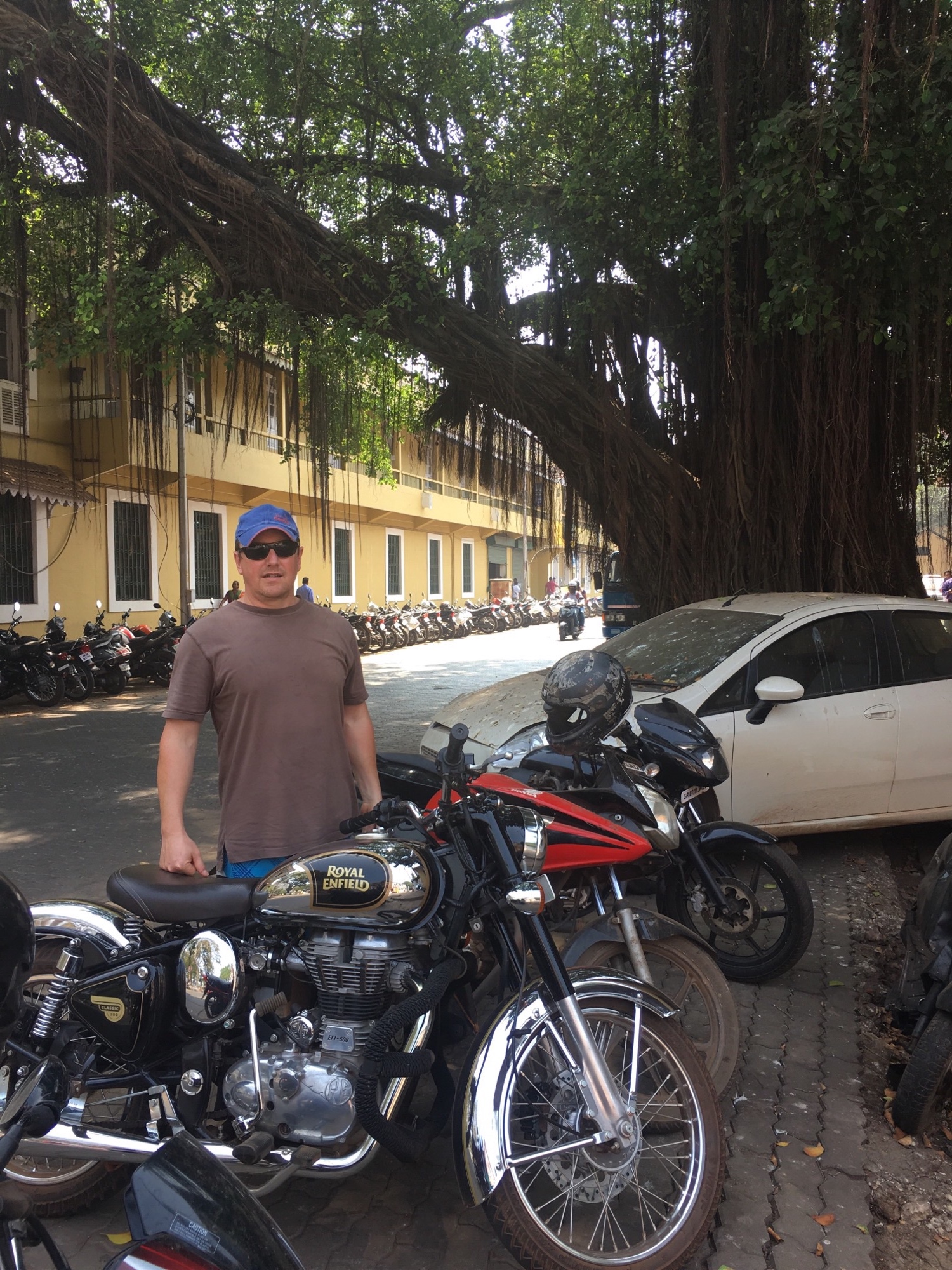 The Goan coast is ideal for a biking break and a gentle introduction to riding on chaotic Indian roads compared to the more densely populated parts of the Sub-Continent.

Our ride of choice was a Royal Oilfield Bullet 350. It’s retro design and old-school engineering provided all the shake, rattle and roll we could ever need but plenty of fun along the way too. This bike is THE classic ride for Indian roads and two-up was much more comfortable than the modern mopeds, Honda-Heros or Suzuki Pulsars.

To be perfectly honest, at home I wouldn’t normally choose this bike, still based on the original 1930’s design, although allegedly with lower grade alloys used throughout in the manufacture and so notoriously unreliable. In India, it is a different story. The alternatives are less attractive, we weren’t planning to go far and almost every couple of hundred yards and in every small town and village on the way there is someone fixing a bike. You can bet it is probably a Bullet given their prolonged popularity and judging by the home-made repairs and patina on our machine. We actually saw someone, right on the edge of the road casting their own replacement engine casings!

We leave our hotel, centrally located on the coast and head into Panaji, the capital of Goa. Enjoying the agricultural water-pump soundtrack of the single cylinder engine we road towards the Big Smoke.

Despite the growing heat and humidity,  the city has a charmingly down at heel feel and some lovely Portuguese architecture. We stop at Singbal’s Book House, enjoying the breeze coming through the large teak-shuttered windows into the piles of books, all sold at a fraction of the cost in the UK.

We did not take the option of one of the musty, well-used helmets with the bike hire having been told that helmets were only mandatory on “highways” and then only for the rider, never for the pillion. Leaving Panaji we were forced onto the main bridge over the river, undoubtedly a highway. Rammed with traffic and traffic cops, we managed to avoid any unwanted attention and headed north to Vagator, Morjim and Mandrem.

There were great cafes and bars along the way and increasingly deserted beaches and pure white churches and blackened forts, all set amidst green coconut plantations.

We rapidly learn that just because someone indicates left, it doesn’t mean that they aren’t going to turn right and as long as the horn is working, virtually everything else is a bonus, headlights, brake lights, in fact even the brakes themselves are superfluous.

Road signs are also much more useful than the plethora of pedantically specific ones we are used to at home – “Follow Rules” really is all you need to know on Indian roads and it would improve things a lot if people actually did more often. Driving on the left is also reassuringly familiar, although there are also plenty of people also driving on the left to make you feel at home wherever you come from.

In addition, the Portuguese and catholic influence means that weekend rides are even quieter. This is all relative and compared to the beautiful riding roads if Devon, defensive riding and a loud and frequent “horning” are mandatory and highly  appreciated by your fellow road-users!

The optimum speed is just above the 50 mile an hour speed limit for bikes, which annoying is less than that for cars. On main roads this forces you to break the law to ensure that you don’t get pushed into the kerb by overtaking 4-wheelers and you accelerate away from the helter – skelter, weaving throngs of scooters. Speeding also means that you benefit from the rushing coolness of the air, especially in the greener areas out of the city or those with a coastal breeze.

The next day we headed south towards more of the same amidst the remote areas around Palolem. We stopped at the almost deserted Galgibag beach and had a refreshing swim and some cool Kingfisher Ultra beers from a hawker who turned up just a few minutes after we stopped.

The sun was getting low, I didn’t trust our headlights and so we remounted our Enfield in wet shorts and flip flops, kicked the warm engine over easily with the Kickstarter and cruised north on our way after a great couple of days of relaxing riding!